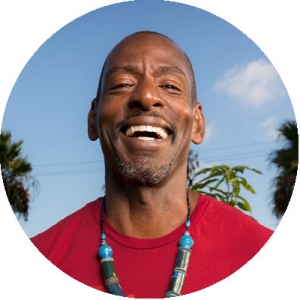 Artist and designer that works with permaculture gardening, Ron is currently described as a guerrilla gardener. His work on the development of community gardens seeks to change the way people relate to food. One of his first projects was to plant an organic garden on the sidewalk of his home in South Central Los Angeles, with the help of volunteer gardeners. Initially discreet, the project became known and caused controversy in the city, involving the population and entities defending his work. Ron believes that these urban gardens are a vehicle for social transformation, for they can provoke the development of respect for life in communities and represent a healthy and sustainable future. Currently, with the Green Grounds group, he binds volunteers on the planting of urban gardens in several areas of the city, such as homeless shelters, sidewalks and vacant lots. His studies and work have also been focusing on soil regeneration in communities around the world, with The Ron Finley Project.

GANGSTA GARDENING
The man who is revolutionizing California’s urban communities