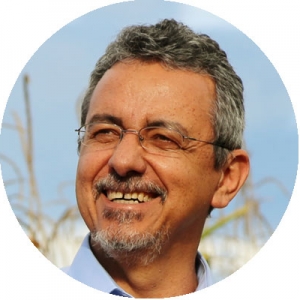 Graduate in Agronomy by the Federal University of Viçosa, Maurício has a Master’s degree in Genetics by the Purdue University, a PhD in Molecular Biology of Plants by the University of Arizona and a postdoctoral degree by the Department of Agriculture of FAO-Italy. Since 1989, he is a researcher at the Brazilian Agricultural Research Corporation (Embrapa). He has been a board member of the Global Panel on Agriculture and Food Systems for Nutrition, in London, since 2013. In 2014, he won the Distinguished Agriculture Alumni Award, at Purdue University, and became a member of board of the World Food Center, based at the University of California. In 2015, he was awarded with the Order of Agricultural Merit by the French Government. In 2017, he received the insignia of the Order of Rio Branco, with the rank of Commander, by the Ministry of Foreign Affairs (Itamaraty).

FOOD AND NATURE
How to boost food production without destroying nature?