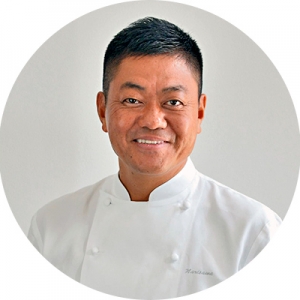 Yoshihiro is a chef and the owner of the two-Michelin star restaurant Narisawa, in Tokyo. He is one of the few Japanese chefs who choose to apply new techniques, textures and flavors to the country’s traditional cuisine. By taking the reverse path of that of many chefs, he brings to Japan the modernism and innovation of mainly European cuisines. That makes up for what he defines as an authentic and natural cooking style.

He is considered a pioneer in connecting the kitchen to environmental protection. He developed a peculiar relationship with the natural world by creating dishes such as: Soil Soup, Water Salad and Essence of the Forest. He changed the way his customers relate to the environment and sustainability.

His philosophy centered on Satoyama cuisine allowed for him to be recognized at Madrid Fusion 2010 as ‘Most Influential Chef’ of the year. Yoshihiro fights for sustainability and advocates for ‘beneficial gastronomy,’ which means healthy, natural and commercially fair food. He is known for promoting natural and organic ingredients.