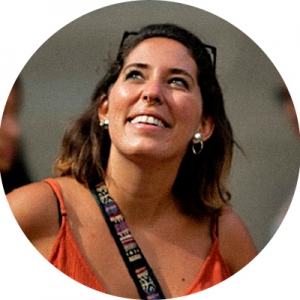 Paloma is one of the main advocates for topics such as human rights and climate change, with a primary focus on young people from all around the world. She coordinates the Climate Work Group at Engajamundo, an organization started by the young to the young. The philosophy of its members is that changing themselves and their surroundings is a way to start changing the planet. She works as an advisor at Instituto Socioambiental (ISA) on anything related to socio-environmental law, including the defense of forest peoples. She is also the co-founder of Ciclimáticos, a cyclist activist collective who documents how vulnerable communities have been affected by climate change and what adaptation and mitigation initiatives they have been employing.

FROM THE UN TO FRUTO
youth and engagement