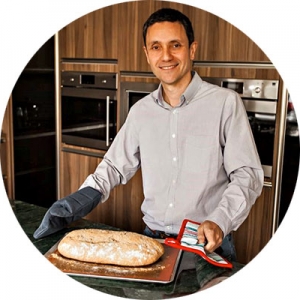 Born in São Paulo, Camargo is a commentator, speaker and gastronomic consultant. Producer of specialized food content, he is curator of the Taste of São Paulo event, a columnist for the “Zero Hora” newspaper and author of the “Eu Só Queria Jantar” (published by CLA), a compilation of his best journalistic texts. He is also a researcher and professor of homemade baking, author of the book “Pão Nosso” (published by Panelinha), as well as the creator and curator of the Pão com Pão event. He is a consultant at Instituto Brasil a Gosto. In 2005, he was one of the founders of Paladar, a gastronomic magazine at the “O Estado de S. Paulo” newpaper, and from 2004 to 2015 he was a restaurant critic for the newspaper. He was also one of the creators of the food festivals Paladar – Cozinha do Brasil, Paladar and Paladar Alta Performance, strictly for entrepreneurs.