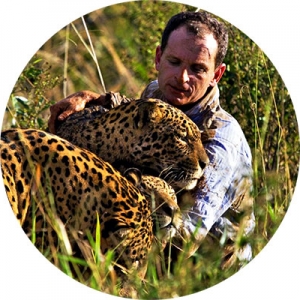 He holds a Biology degree from Universidade Católica de Goiás, a master’s in Biology from Universidade Federal de Goiás and a PhD in Animal Biology from Universidade de Brasília. In 2002, he founded, alongside Anah Tereza de Almeida Jácomo (his wife), Instituto Onça-Pintada – IOP, a non-profit organization whose mission is to preserve the largest feline in the American continent. As president of this institution, he leads species conservation actions throughout Brazil. He manages, while allowing for the animals to be free, programs for the long-term monitoring of jaguar populations and their natural prey, and for solving conflicts between jaguars and ranchers. Besides that, he created the Onça-Pintada certificate. And, since 2009, through his breeding program, he has been contributing to the conservation of the species in captivity. His love for the jaguar and work toward its conservation were awarded in 2017 with his appearance in the book Wildlife Heroes, dedicated to the 40 largest conservationists in the world.

JAGUAR
The challenge of protecting a symbol of our biodiversity